How the CTDL-ASN Profile Works

In order to describe competency frameworks in as interoperable a manner as possible, Credential Engine will build on an existing description language called Achievement Standards Network Description Language (ASN-DL) that was developed by the U.S. National Science Foundation (NSF) between 1999-2013 for the description of logically related sets of knowledge, skill and ability assertions. The ASN-DL is designed using the W3C's Resource Description Framework (RDF) for describing Linked Data on the open Web. The CTDL-ASN Profile adopts in full the set of properties and classes defined in the ASN-DL and will be judiciously extending that set through property and class refinements as well as the addition of new properties and classes defined in CE's own Credential Transparency Description Language (CTDL).

The ASN Description Language (ASN-DL) is made up of two fundamental entities: (1) the Standards Document - a competency framework as a whole, and (2) the Statement - the individual assertions of knowledge, skill, and abilities of which a Standards Document is comprised. These two entities - documents and statements - are modeled in terms of an entity-relationship model (ER) and embodied as a directed graph using W3C's Resource Description Language (RDF). An extensible set of structural and semantic relationships between the ASN's primary competency framework entities - the standards document entity and its atomic statement entities - have been defined.

Following that pattern, CTDL-ASN is made up of its own two fundamental entities: (1) the Competency Framework, which serves as a means of describing and referencing the entire framework as a whole, and (2) the Competency, which is an individual assertion of knowledge, skill, ability, behavior, attitude, or other attributes that would fall under the broad notion of a competency. These entities closely follow the ASN-DL's modeling as an entity-relationship model.

The following diagram illustrates example encodings of a competency in the Degree Qualification Profile (DQP) using both ASN-DL and CTDL-ASN:

Note that each entity has been assigned a unique identifier in the form of a Uniform Resource Identifier (URI) using the HTTP protocol. This means that each resource is a "first class citizen" on the open Web and can be openly referenced and linked too.

The diagram above illustrates what is called an ASN Taxon Path which is defined as a single traversal of a branch of a competency framework - here from the root (i.e., the standards document description) to a leaf (i.e., a statement at some arbitrary level in the branch hierarchy). Just as the atomizing of the text de-contextualizes the standard document's member statements for unique identification, description, and reference, the notion of the ASN Taxon Path re-contextualizes those statements. This re-contextualization is fundamental to human comprehension of the competencies since many atomic statements, standing alone, convey insufficient meaning.

For the purpose of illustrating the notion of the ASN entities and relationships, the descriptive properties of the ASN Taxon Path members have been kept to a minimum. In fact, metadata describing additional attributes of a competency (e.g., skills embodied, proficiency levels, etc.) are possible. Documentation of the properties and classes of the CTDL-ASN Application Profile are available.

The ASN-DL offers a range of properties to express different degrees of similarity between competencies; additional mapping properties can be defined in the CTDL-ASN Profile as needs arise.

For some uses of a particular ASN-modeled competency framework, the level of granularity of leaf competencies in the canonical version may not be sufficiently granular. For example, a specific competency may aggregate several skills that some 3rd party creator of assessment instruments may wish to handle separately. The ASN-DL model makes it possible to increase the granularity of expression of a competency by distinguishing between canonical (original) competencies as promulgated by the authors of the framework and non-canonical (derived) statements added by 3rd parties. Derived 3rd party ASN statements “refine” original statements by making more specific granular assertions. Since derived statements are treated as first-class entities in the ASN, they are assigned URIs in the same manner as original statements and clearly identified as “derived”. Of course, derived statements can be easily eliminated, not display, or treated in some manner as simple annotations by services consuming the standards documents.

As a result of this extensibility, any 3rd party may create more granular statements without authorization in its own 3rd party namespace and relate those statements to the canonical (original) statements while identifying such competencies as "derived". Of course, since 3rd party statements are in different namespaces than the canonical version, 3rd party provenance is machine identifiable. The following figure illustrates this 3rd party "annotation" process. 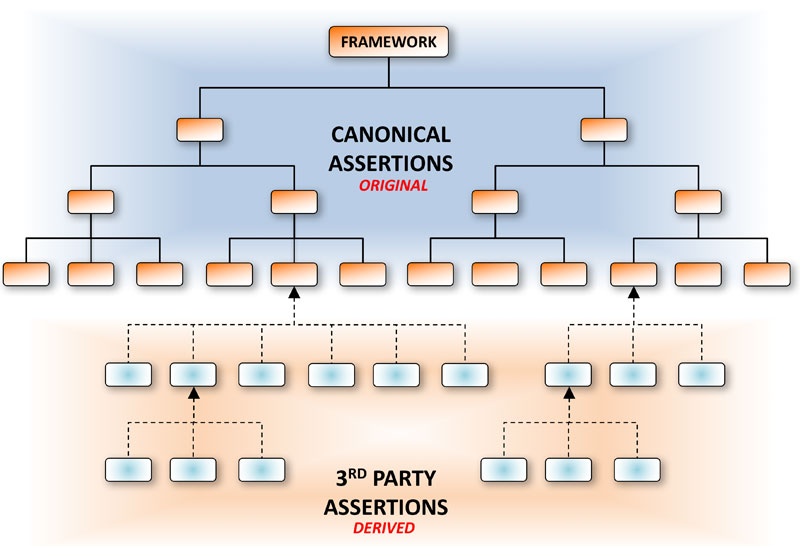 Exact Alignment
The relevant concepts in this competency and the referenced competency are coextensive.

Major Alignment
Major overlap of relevant concepts between the this competency and the referenced competency.

Minor Alignment
Minor overlap of relevant concepts between this competency and the referenced competency.

Prerequisite Alignment
The referenced resource is a prerequisite to this resource.